The Hovlands get Fingerprinted – Applying for Residency in Costa Rica (VIDEO)

Applying for Residency in Costa Rica

In early August we went back to Costa Rica to apply for residency. We stayed in San Jose proper which is unusual for us, as we normally get straight on a bus to Siquirres and never get to see the big city. We decided that after business was was finished that this trip would all be about fun. We chose a funky little hostel that had a 24 hour bar, called the Galileo. We didn’t get much sleep that night.  It just happened to be a short walk to the ARCR (the organization that we hired to take care of legal matters). The following silly video was shot the morning of our first appointment with the lawyer.

The Hovlands get Fingerprinted from Barry Hovland on Vimeo.

We had two subsequent appointments, one to get our fingerprints taken & the other to re-visit the place where they take the fingerprints when the system was back up and working. They also did a background check with Interpol to make certain that we were not mastermind criminals that would take over the country and then rule the world. They ascertained that we were clean and sent our documents to immigration. 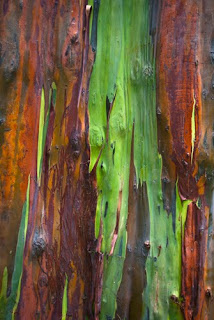 We celebrated at 9 am with a Nicaraguan brew, it was a bit nutty. We heard that there was a restaurant with $12 lobster tails so we went for a walk. Sabana Park in downtown San Jose is lovely. There are Eucalyptus trees that are 30ft+ tall and have rainbow stripes where the bark is peeling. It looks stunning after a rain and we know that because it started pouring on us. The thunder was so loud that it made car alarms go off, no lie. We had to run to get a taxi. I made my first joke in Spanish which went like this….Taxi driver “Your husband does not speak Spanish?” Me “No, it is very difficult for redheads to learn Spanish.” …and for some reason the driver laughs & laughs, big guttural ones. I am pleased with myself so I tell Barry what just happened and he doesn’t think it’s funny. Oh, and they were sold out of lobster which Barry said was payback for my not being a good wife.

In the next post we will add a video of the condition of the cabin, how I fell through the floor and luckily running into the guy who has some additional property that we would like to buy.