Tanagers Costa Rica – just a sample of the colorful birds found on our farm.

Tanager is a very large family of birds. At this moment the grouping is being divided into subsections due to molecular studies that have brought about variations that were unknown previously. I use our books from 2009 and 2010 as identification sources as well as some internet research. A site I really like is allaboutbirds.org from Cornell University’s Ornithology Lab. See our entire Bird section.

These tanagers are in no way the entire array of tanagers we see here on the Atlantic Slope of Costa Rica. They are seen more often when nest-building and when gathering food for their young, which both male and female feed. 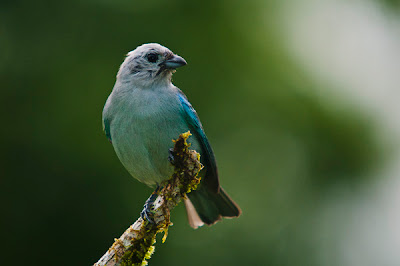 This songbird thrives on fruit and is commonly found around human habitations.

The Summers visit us when it is Winter in the U.S. They help us out by eating bees and wasps. They catch a live bee in flight and then beat it against a tree branch to kill it before eating.

We generally see our Crimson Collared Tanager when it is nesting time. They make their nests out of our plantain,banana and Heliconia leaves. The females look a lot like the males, maybe only a bit less bright. Their beaks and their legs are light blue which is in contrast to the extremely black and red design of their feathers. It’s pure pleasure to see these birds gathering nesting materials in December and January.