A flash mode that you should ALWAYS have ON in the menu of your DSLR is Rear Curtain Sync.This is a flash option that is available on most intermediate to advanced DSLRs that I have engaged 100% of the time on my camera and I have yet to find an instance where I would want Rear Curtain Sync disengaged while taking an image.

When the Roadrunner runs past the coyote is the trail of dust before or after him?

In normal flash mode your flash/strobe-light will fire at the beginning of an exposure.You do not want this most of the time.Imagine a four second exposure at night of a car driving horizontally across the scene; You press the trigger on you camera, then FLASH a 1/1250 second of light (give or take) pops out of your flash then four seconds of exposure happen as the car drives past burning it’s tail-lights into the scene.The problem is the flash burned an image of that car into your image BEFORE the taillights streaked across your scene. This does not look natural; the streaks are before the motion in the scene happens.

(Gas is expensive, So lets pretend my wife has taillights.)

So we have Rear Curtain Sync mode or sometimes called Rear Shutter Sync and what it does is allow the flash to fire at the end of an exposure.Let’s take our same scene of a car at night:you press you shutter button as a car drives past, first your shutter opens exposing your sensor to the cool night, the lights of the car burn a trail of light across your scene then FLASH, the strobe lights up the car in front of the streaks of light created by the head and taillights of the vehicle.The scene is taken in order as we think motion should move and will probably create a more comprehensive image to the viewer.

So that was an example of a long exposure and your thinking; well sure that makes sense for a long exposure but if I am trying to freeze motion with a short exposure what’s the big deal?The answer is this, you may not notice the difference but I would rather keep my camera on Rear-Curtain Sync all the time so that I don’t have to go into my camera menu when I don’t need to. Also, Rear-Curtain Sync is useful on some surprisingly fast shutter speeds such as in this hummingbird image.Notice the bird moves its wings so fast that 1/250th of a second creates some motion blur. 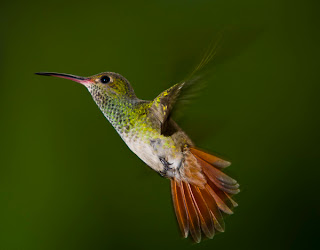